Originally from Portglenone, Alexander McMullan Purce ran a very successful banner painting concern alongside a retail drapery business in the White House, 20 New Street, Randalstown from about 1905. Banners were produced for all sections of the community and for a wide variety of organisations both at home and overseas. The firm employed a staff of artists “second to none in the United Kingdom,” all under the supervision of Mr Purce, “an artist of high repute”. Another asset which placed the firm “miles ahead of all competitors” was its famous invention, “Nevercrack”, which enabled it to paint banners so light and pliable they could be rolled tightly without causing any damage. After Alexander Purce’s death in 1947 the family firm continued to trade until 1980. 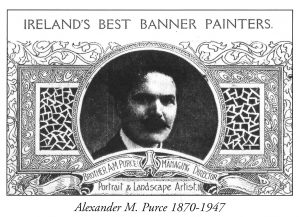 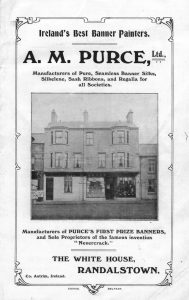