The building that formerly stood at the south west corner of New Street and Main Street was built some time shortly after the creation of New Street (originally New Market Street) in 1828. From the 1850s the Butler family, originally from Craigmore, ran a haberdashery and drapery business there. Brothers William and Robert McFadden bought the premises in 1901 and traded as McFadden Bros General Merchants, selling groceries and farm feeds. The business remained in the family and in later years focussed on garden equipment and hardware until the retirement of the proprietor, Norman McFadden, in 2007. The section of the building facing Main Street was a dwelling house. The building was demolished in 2019. 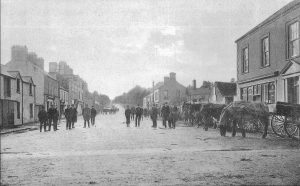 The photograph shows New Street on a market day in c1910. The McFadden building is on the right and was well positioned to take advantage of the additional business that market days would have brought to the town.