The building, partly three-storey, which once stood at 45-47 Main Street operated as the Farmers’ Hotel from 1880 until the early 1900s. After that Jim McLean ran a cobbler shop on the ground floor while Bob Patterson made saddles and harnesses. The upper floors were domestic apartments. Samuel Getty moved his electrical business to the ground floor around 1960.

On 15 May, 1962, at around 8.15 am, Jim McLean, the cobbler, lit a paraffin heater and left his shop for a few minutes. While he was away the heater set fire to some paper. The fire quickly spread under the stairs which led to one of the upstairs apartments occupied by the McIlvenna family. Within an hour the building was entirely destroyed. Firemen were prevented from reaching the workshop and offices at the rear of the premises where containers of bottled gas were stored.

The McIlvenna family escaped without injury but lost all their belongings. Two days after the fire part of the front wall collapsed on to a van parked there by James Moore, a milkman. The following week the remaining tall chimney was removed.

This was the second fire at these premises, the first one having occurred in 1910 when occupied by Samuel Picken, who ran a public house and the Farmers’ Hotel. 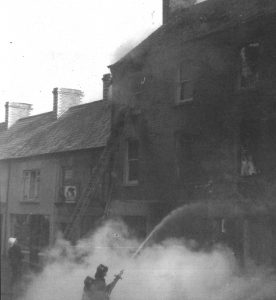