Millmount House was a large three-storey Georgian House which overlooked the river and the town. The earliest known residents (in 1810) were James and Charles Dickey, owners of the cotton mill which was situated on what would become the Old Bleach site. The Dickey brothers having gone bankrupt, Millmount was bought in 1825 by Lord O’Neill and used as a home for his land agents for the next hundred years.

Land agents were employed to manage the estate on behalf of the owners. They conducted the business affairs of the estate, supervised the farming of the property by the estate’s tenants and collected rents and other payments. They were senior members of the estate’s staff and held a relatively privileged position in society. 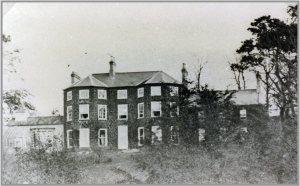 George L. Young and later his son, Robert, were the last land agents to live in Millmount House. They left the district in the 1930s, after which Millmount House was purchased by William Hurrell and converted in flats. The house was demolished in 1972.

The Young family played a major role in a tragic incident which occurred in the Shanes Castle Estate in 1909. A first-hand account written by Mrs Young has survived:

The First Great Tragedy in my life

It was a most lovely day. I had been out most of the morning. Just after lunch about 2.00 George and Robin [their son] went off to have a game of golf. I had intended going with them but had a letter to write so did not go. They had not left the house ten minutes when a girl came running to the door asking for Mr Young and told me one of the officers of the Rifle Brigade who were fishing in the park had drowned in the river at the Yew Tree Hole. I rushed off at once through the park gate to the holm near the gate where I knew I could see the 1st green on the golf links and there I saw George and Robin through the trees across the river. I called to them and told them and they both ran off at once towards the second bridge. I came quickly back and sent off the trap with ropes and rugs and everything I could think of, but it was 4.00 before the body was got.

Poor Mr Welthorpe (his friend who had been fishing with him) told us he was fishing at the other side of the river and about 2.00 he was just thinking of taking his lunch when he heard a shout – and running up the bank saw Mr Cookson just disappearing below the surface in Yew Tree Hole. He tried to cross to his assistance but having himself got on heavy waders the current was too strong and he felt the water lifting him off his feet. He then had to turn back and ran to Boyd’s Cottage. There was no one there but old Mrs Boyd. Then he ran on to the Castle and got one of the grooms to ride into Randalstown. That was how the news first came into the town.

Of course all this took time, but the body never rose again – I suppose the heavy waders keeping it down. About 4.30 I got a message from George to get all ready for the body as he was getting it brought to Millmount and soon after the mournful procession arrived with the dear body wrapped in rugs in the spring cart. It was brought into our library… Then I did all that had to be done and it was done indeed in most loving sympathy and deep reverence. Oh how my heart ached to think of his dear mother. I almost felt her presence in that room. Never never can I express the deep sorrow in my heart, and all I did I did it as though it were my own beloved son.

In the meantime George was telegraphing and telephoning everywhere. Mr Welthorpe was most dreadfully sad. He seemed dazed and could hardly speak to anyone. About 6.00 two officers arrived in a motor – Lieuts Follett and Glynn. It was most pathetic to see Mr Glynn kneel beside the dear body they loved. He told me “Mr Cookson was just the favourite of the regiment”.

The Coroner was telephoned to come at once and the inquest was held in the Estate office at 7.30. At 9.30 Mr Glynn and Robin put the dear body in the coffin and at 10.00 Mr Welthorpe, Mr Follett and Mr Glynn left in their motor for Holywood. At 10.30 the coffin left for Holywood by road and arrived there at 5.00 next morning.

On Saturday morning there was a beautiful Military Service in the barracks at Holywood to which my son Neville and I went. It was most touching to hear all the officers and men singing “Rock of Ages” and “Jesus Son of Mary hear”, the band playing very gently. Then the coffin was taken on a gun carriage drawn by six horses (covered by the Union Jack and white wreaths. Also his sword was on the coffin.) through Belfast and sent by steamer to Cornwall.

Mr Cookson was raised in Trelissick House in Cornwall, which is now a National Trust property, and is buried in the local churchyard with his parents. Tragically for the family, his elder brother Geoffrey had died just two years previously of the plague whilst serving with the Indian Army.

Other information has since emerged about Lieutenant Cookson. He was a member of the 1st Battalion Rifle Brigade Football Team when they won the Irish Army Cup at Dublin in April 1908, just a year before his death.

Cookson’s obituary appeared in the Rifle Brigade Chronicle for 1909:

Christopher William Cookson joined the Regiment from the Militia, 20 May 1905 and served with the 1st battalion in Malta and Ireland.

The tragic circumstances of his death are still fresh in the minds of Riflemen. On 7 April 1909 he went with a brother officer to fish in Maine Water, Randalstown, which had been rented by the battalion from Lord O’Neill. He appears to have fallen into a deep hole and the water in his wading boots rendered swimming impossible, there was also a very swift current running, and his companion was powerless to help him, nearly losing his own life in his efforts to save his friend.

He was only 26 years of age, and a very popular and promising officer. 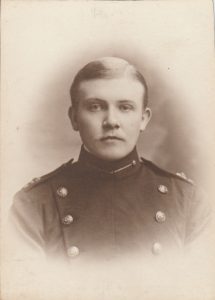 (Thanks to Joe Cookson for granting use of the letter and photograph of Lt Cookson.)