The Scout hall was built originally for the Workmen’s Temperance Club. The club was founded in 1910 as part of the ‘Catch-my-Pal’ movement, otherwise known as the ‘Protestant Total-Abstinence Union’, and was originally based in the hotel that stood at the town bridge.

Indoor and outdoor games were organised to counter the attractions of the pub. A fund-raising campaign was started to equip the building, to which the directors of The Old Bleach made a generous donation. The club had a reading room, table tennis room, card room, draughts room, shooting range, a billiard room and provision for other small games. 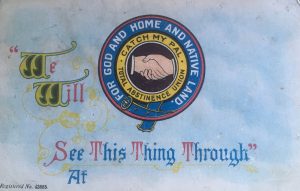 In 1933, the club moved to a specially built wooden hut at the bridge in Moore’s Lane in which four billiard tables were accommodated. This functioned until 1948 when Randalstown Rugby Club took over the building. In 1965, the building became the Scout Hall. Renovations including a rear extension to accommodate a kitchen, store, office, toilets and showers were completed in 1975.